The HMG Team Leaders select and train a group of new students, helping them integrate into the latest club activities.

In November we recruited 11 new members into the Himalayan Makers Guild (HMG). Taking on new members is an indispensable part of the club’s sustainability and this was a great opportunity for the Team Leaders to take ownership of the club’s future. They rose to the task splendidly, deciding on the number of new members, how prospective members would sign-up and be selected, and finally training the new members to help them integrate into our latest club activities.

Over a period of 2 months after the formation of the club in September, 16 of the original 62 members (26%) have left the club. Ten of those students lost their membership after missing more than two activities without giving prior notice, which is a condition they each agreed to when signing the membership expectations document. Five more resigned from the club voluntarily before missing more than two activities. The gender distribution changed from 60% female to 68% female, and this change was maintained after recruitment1. 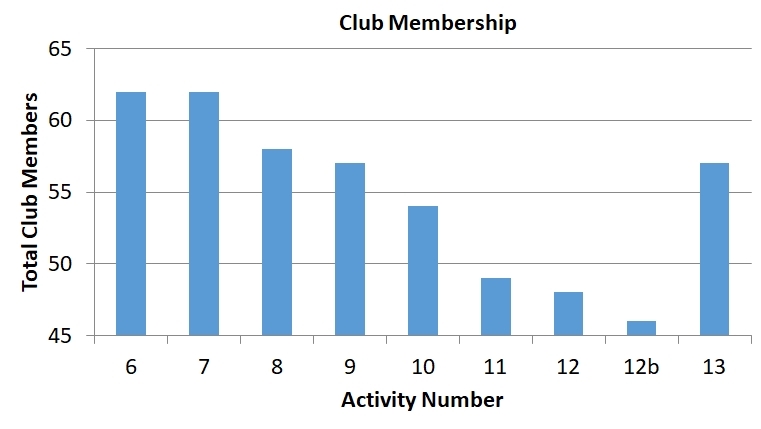 A plot of total membership since the formation of the club just prior to Activity 6 on September 16th, 2017. New member recruitment was completed in time for Activity 13 on December 16th.

The students at SMD school follow a daily schedule denoted by bells and the mass movement of their peers. Generally, they are unused to making commitments outside of their usual schedule. Committing to a regularly occurring activity is made all the more difficult by events occurring on short notice as special guests visit the school. The students also defer to authority with little resistance; if asked by an adult to help with something while on their way to a club activity, they are unlikely to say no. Upholding their commitment to the club is part of the learning experience offered by the Himalayan Makers Guild.

To help the Team Leaders get started with the recruitment process, I asked them 4 questions: 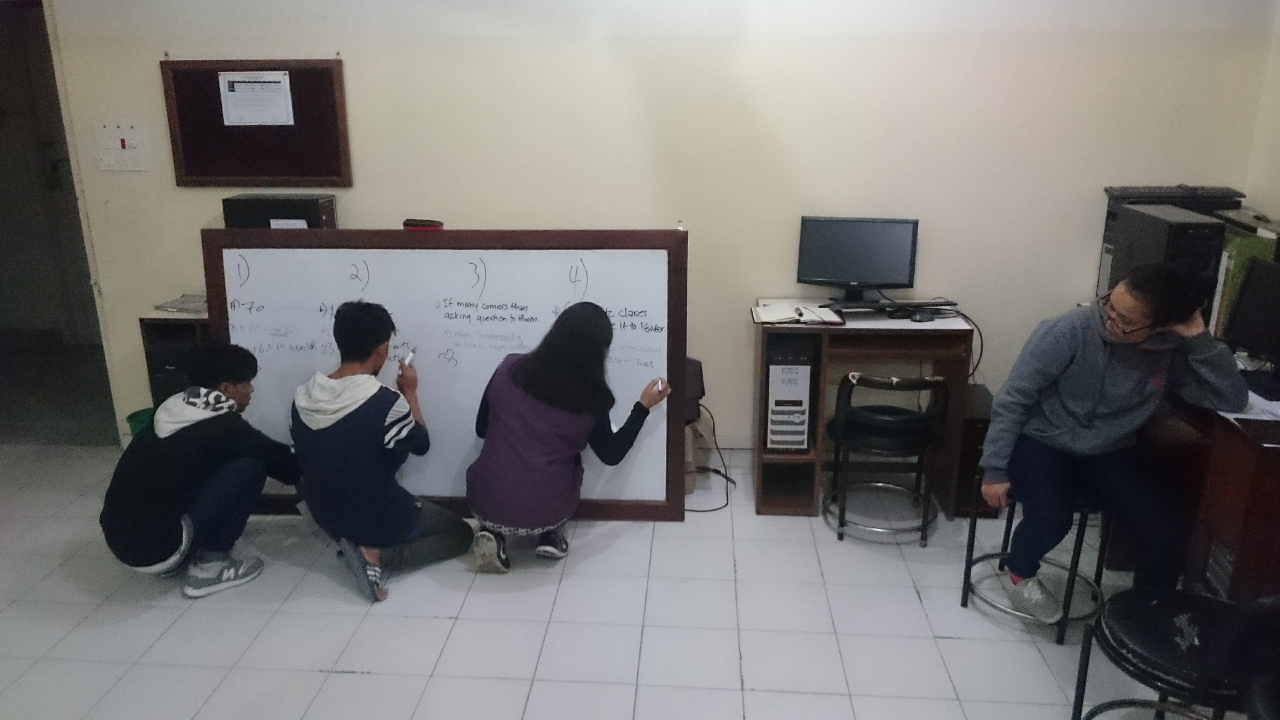 Team Leaders sharing their ideas about how to recruit new members

After some time discussing, they reached the following decisions:

From this first discussion, a few follow-up questions were raised regarding the timing and method for student sign-up and exactly how, when, and what the students would be taught in their introduction training. The Team Leaders decided to post a sign-up sheet with a description of the club, the membership expectations, and information about the introduction meeting. They wrote this document and posted it outside the dining hall 10 days before the meeting time: 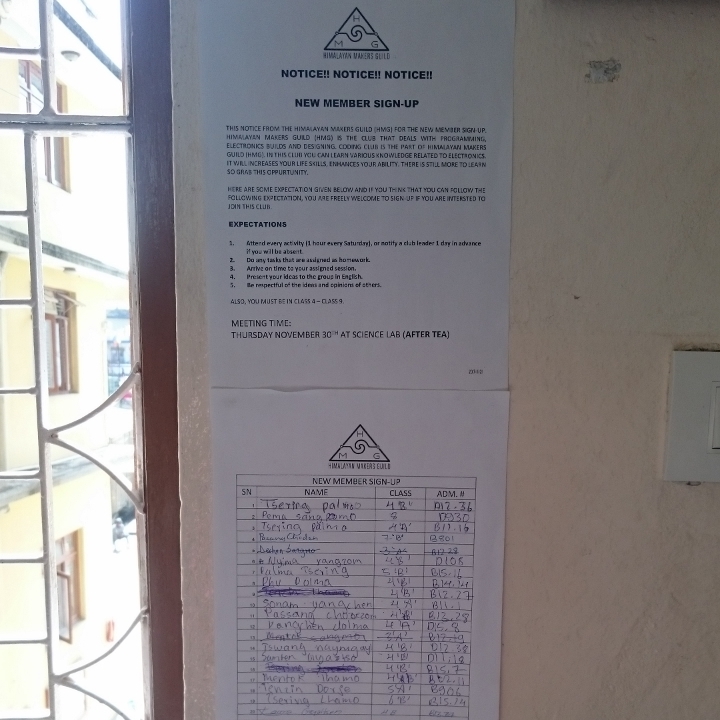 They chose to host 3 lessons to cover the material. Each lesson would take place for one hour after class during the students’ free time, starting Sunday December 10th (after the winter holidays). The Team Leaders divided the responsibility for each topic between their four sub-groups.

About 21 people put their names down on the sign-up sheet. When the information meeting began on Thursday the following week, 10 of those students were present. Most of the students in attendance were from grade 4, with a couple from grades 8 and 9. The Team Leaders reviewed the membership expectations, and addressed any questions brought up by the attendees. Since fewer people showed up than we’d planned to recruit, the leaders decided to make them all members without any further deliberation. The Team Leaders explained the plan for new-member training, and confirmed that the timing of the sessions was possible for them. 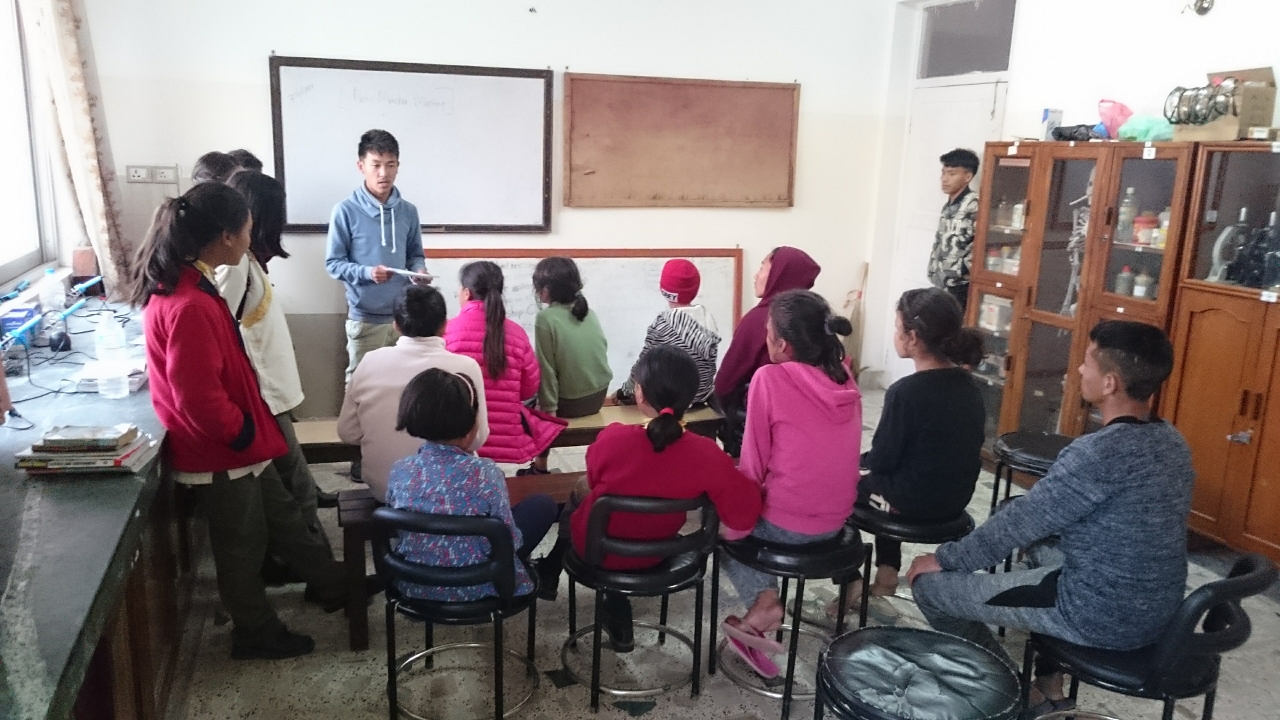 In the evening, we had our usual weekly Team Leaders meeting and reflected on how the recruitment process had gone. They were pleased that we were able to accept everyone who attended the meeting, but noted that attendance was lower than expected. The leaders resolved to communicate the meeting time more clearly during the next round of recruitment. They also decided to try going class-to-class to have students sign up in person, and taking that opportunity to explain the information meeting details. They hope that this will make people think more seriously about putting their name down on the sign-up sheet, and also help clarify the next steps for those interested. The information meeting conflicted with a meeting of the school’s art club, so better coordination with other club activities will be a priority for next time.

Finally, the leaders decided to accept any students who didn’t attend the meeting, but who made a special request to join the club before the start of the training sessions. One student joined in this way, brining the total number of new members to 11.

Considering that most of the new members were from grade 4, the Team Leaders revised their training plan from 3 to 5 one hour activities. I was very pleased to see them respond to the new information, and I think the extra time contributed to the overall success of their lessons. They decided on the following schedule:

I asked each group of leaders to make a general plan for their activities, highlighting the hands-on component and the materials required. They reviewed the lesson plans and student handouts from the related activities that I had already done with the club and used those as a starting point for their lessons. I asked each of the groups to show me their plan the day before their activity. The grade 9 Team Leaders were the driving force behind the lesson preparation and helped guide the younger leaders through this task. 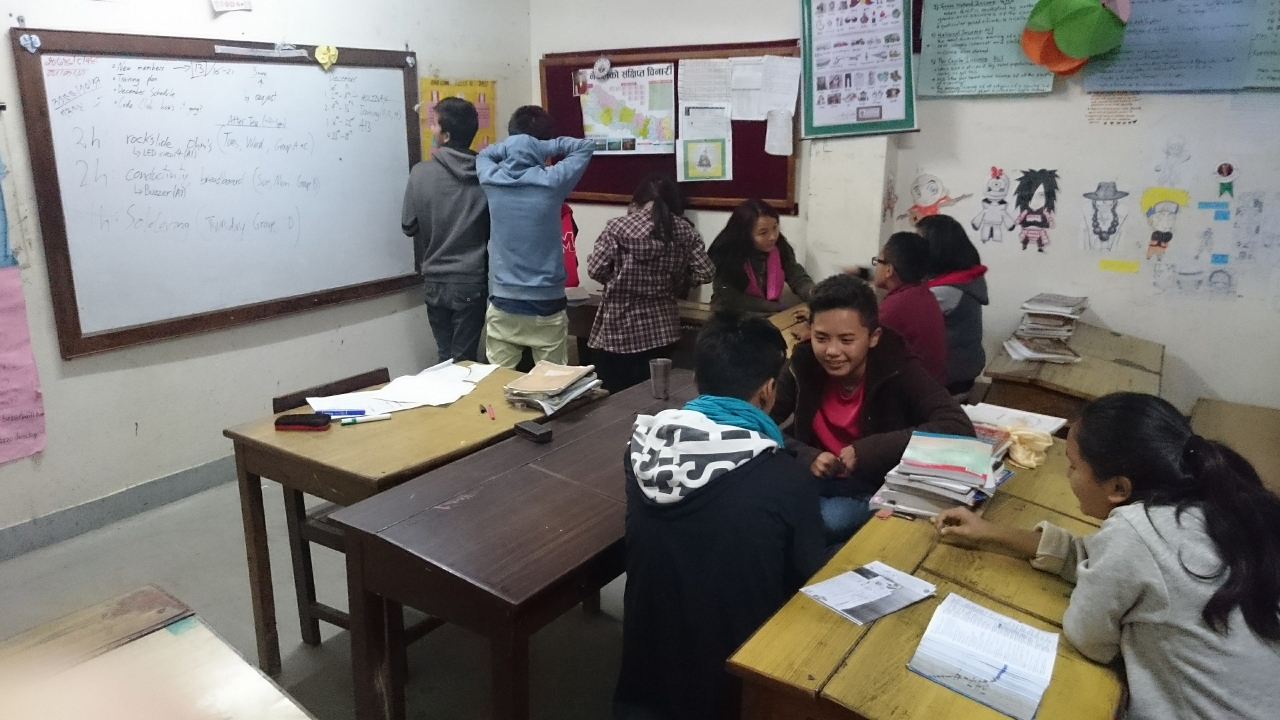 The team leader groups discussing their plans for the training activities

At the last minute, two of the three grade 9 Team Leaders had to miss their training activities due to important scholarship applications. The remaining grade 9 Team Leader, Karma Nyima, generously took responsibility for their lessons. He personally led the first 4 training activities, with group D (two leaders in grade 7 and one in grade 6) taking responsibility for the final soldering activity. 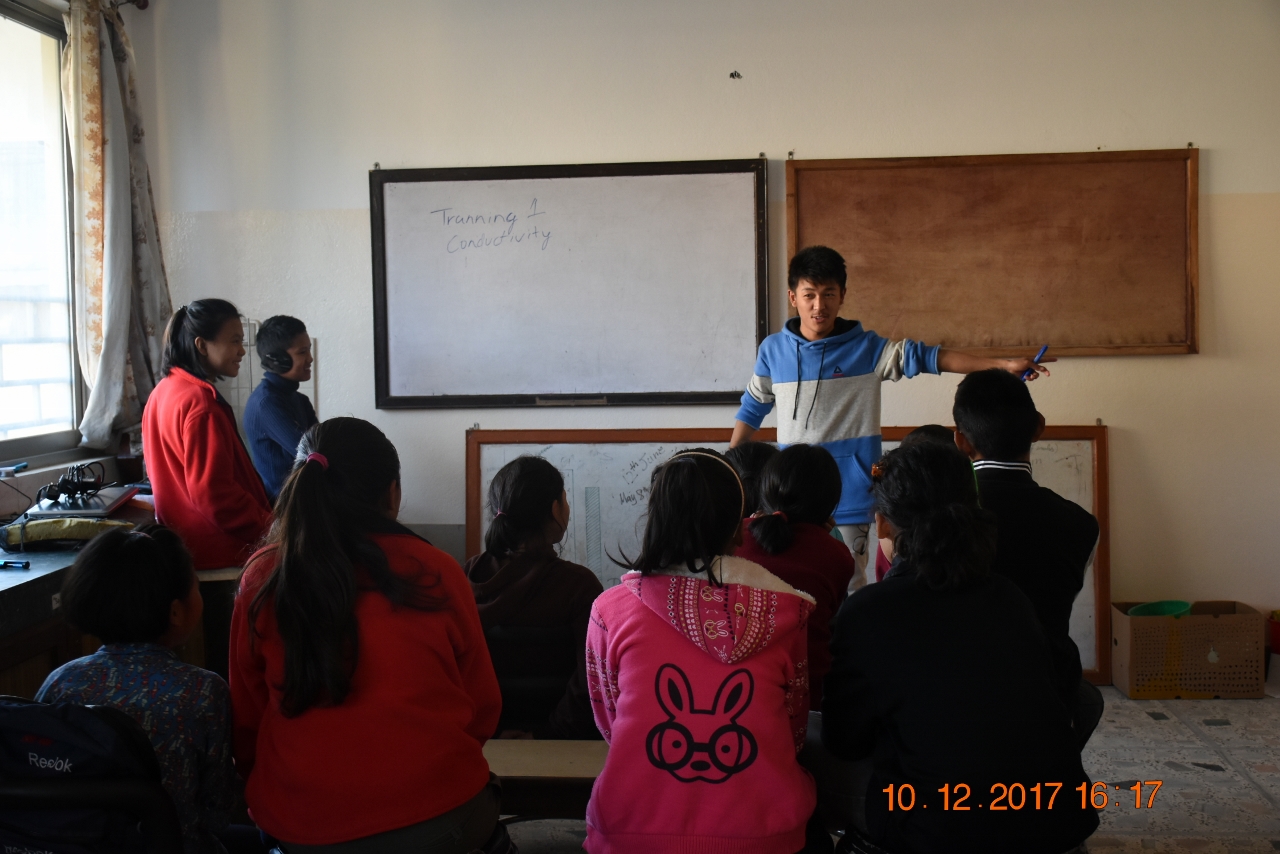 Karma Nyima leading one of the training activities.

The younger Team Leaders played an essential supporting role, distributing materials and helping the new members through each activity. It was also nice to see how the new members in grade 8 and 9 spontaneously partnered up with one of their younger peers to help them understand the topics. 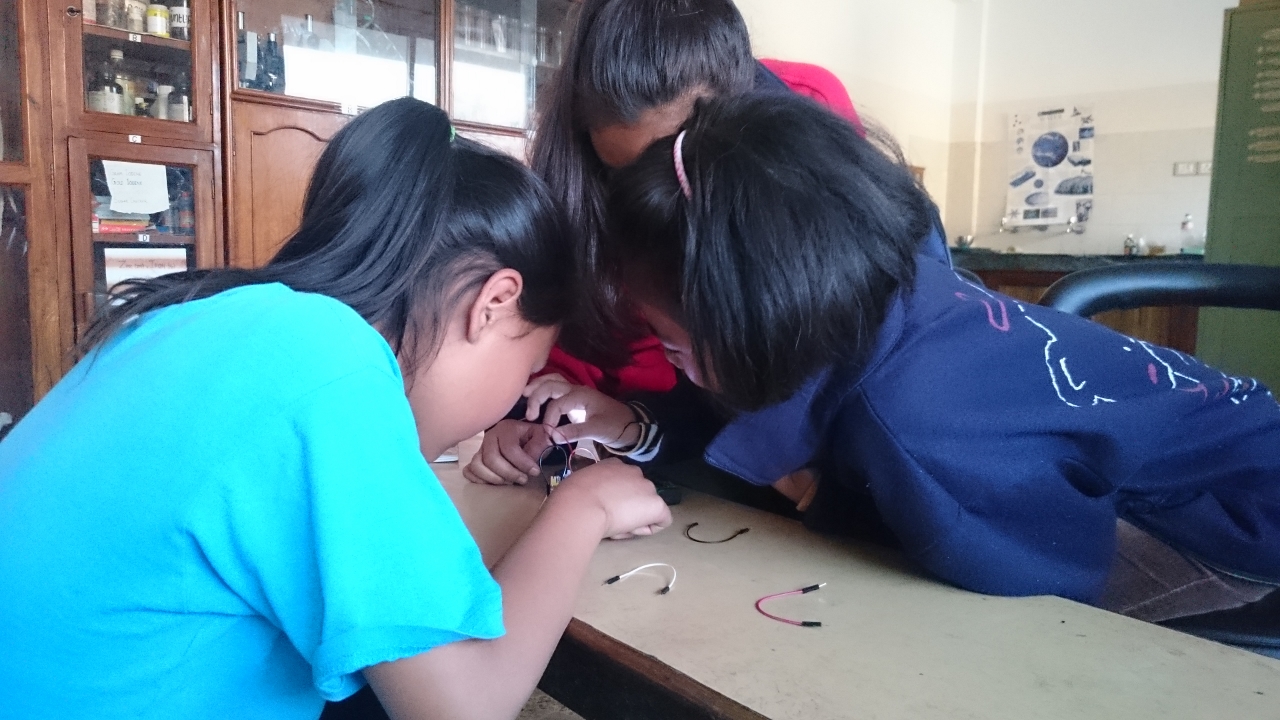 The training sessions were a great first experience for the Team Leaders in running activities on their own. The were able to communicate material that was familiar to them, using the existing activity documentation as a reference.

Training session #1 and #2 - conductivity and breadboards:

From what I saw in Activity 13 and 14 (December 16th and 23rd), the training was successful in preparing the new members to participate in the latest club activities. However, as was to be expected, the students are still not on the level of their more experienced peers. The new members have been divided among each of the four HMG groups and the Team Leaders of each group give extra attention to the new members give them the support they need to understand each activity.

Although the club was only formally inaugurated in September 2017, we intend to do recruitment again soon to continue experimenting with the process, test models for club membership, and get the Team Leaders as familiar as possible with bringing new members into the club before I leave the school at the end of June.