Where things left off with the Himalayan Makers Guild in 2018.

One year ago I returned to Sweden from Kathmandu, leaving the Himalayan Makers Guild entirely in the hands of the students who make up the club. In my last 5 months with the club (February to June 2018), I focused on restructuring it for long-term viability, in the hopes of making HMG completely self-sustaining and capable nurturing the body of knowledge already present among the club’s members. Since then they have been running things independently, using a hands-on peer-to-peer model to teach electronics and programming among the club’s 50 students aged 10 to 16.

During the founding year of the club it underwent many changes in structure and schedule. Here I’ll run though the story of those changes, and the details of the final club structure we settled on.

During our first 7 months of operation (September 2017 until students started exams in March 2018), we did a new activity every weekend, with the members split into 4 groups to keep the class sizes down and accommodate our limited activity materials (~10-15 sets of parts). This approach had a few problems:

In the old structure the Club Head prepared the activities and led them with support from the student leaders as in-class helpers.

Left: A typical activity being led by me as the Club Head with support from HMG co-founder Tashi Choeden. Right: a student leader helping one of her peers.

With the support of our amazing first group of student leaders this system took us through our first 7 months of growth and allowed for a lot of experimentation and discussion on how to better run the club. However, with it’s top-heavy organization, it was not a structure that encouraged long-term sustainability on the basis of student leadership. for more details on the original club structure see Club Setup

Looking at the club from a yearly perspective, we chose to schedule the club activities in 6-month semesters. Each semester culminates in an exhibition for the school’s students and teachers where the club members can present what they’ve built and learned. The schedule for a typical school year looks like this:

April is the school’s year-end break, and 6 months have been allocated to Semester 2 due to winter holiday time and exams in March.

The club members are split into three different groups. New members spend one semester learning core concepts, while more experienced members participate in one of two project groups where they work it teams to build a solution to a specific problem. These project groups allow the students to apply their knowledge, build something unique, and learn about the engineering design cycle.

With guidance and training from the Club Head, all of the activities are now taught by students in those groups - the Group Leaders. A group 10-15 students includes 3-4 leaders. Within the Foundation group, two of the leaders are experienced club members who have already completed the Foundation activities. The other two leaders are from the newly recruited members, giving them the chance to learn how to lead the group from their more experienced peers.

There are two key changes to this new leadership structure:

Each week, the club activities are divided into 2 parts: a training meeting where the Group Leaders and Club Head prepare for the week’s activity, then each group’s activity in which the Group Leaders guide their peers. When training the Foundation Group Leaders, the Club Head conducts the week’s activity with them using the lesson plan and student handout for the activity. The leaders then use those same documents to support their instruction of the group. All 12 Foundation Activities have been carefully documented to make instruction easier for the leaders. Furthermore, some of the leaders will have already done the activity before revisiting it with the Club Head which gives them an extra bit of confidence when leading the activities. 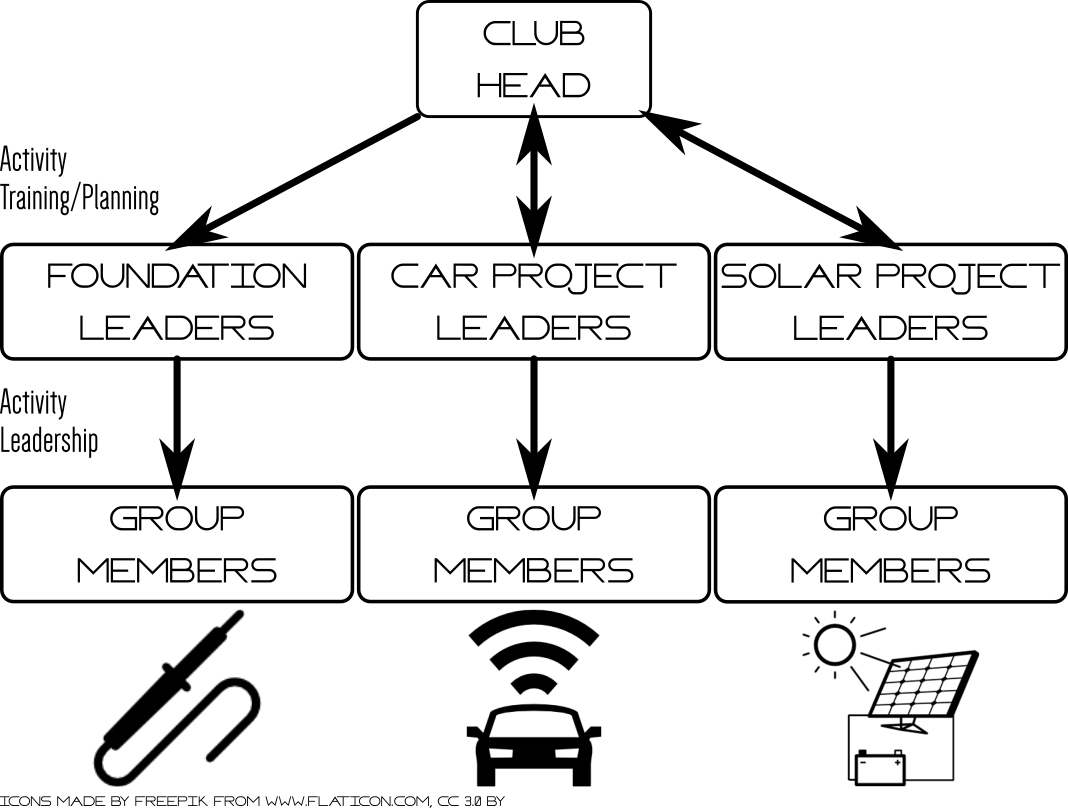 The activities of the project groups are guided by a “Project Definition and Overview” document. Each project’s document contains:

The Club Head helps the Project Group Leaders make use of these documents and stay on schedule as they move through the 6 month plan. The Club Head and leaders work together to plan activities relating to the project, with the help of the resources outlined in the documents. Having been a member of the club, the projects will already be familiar to the Club Head. 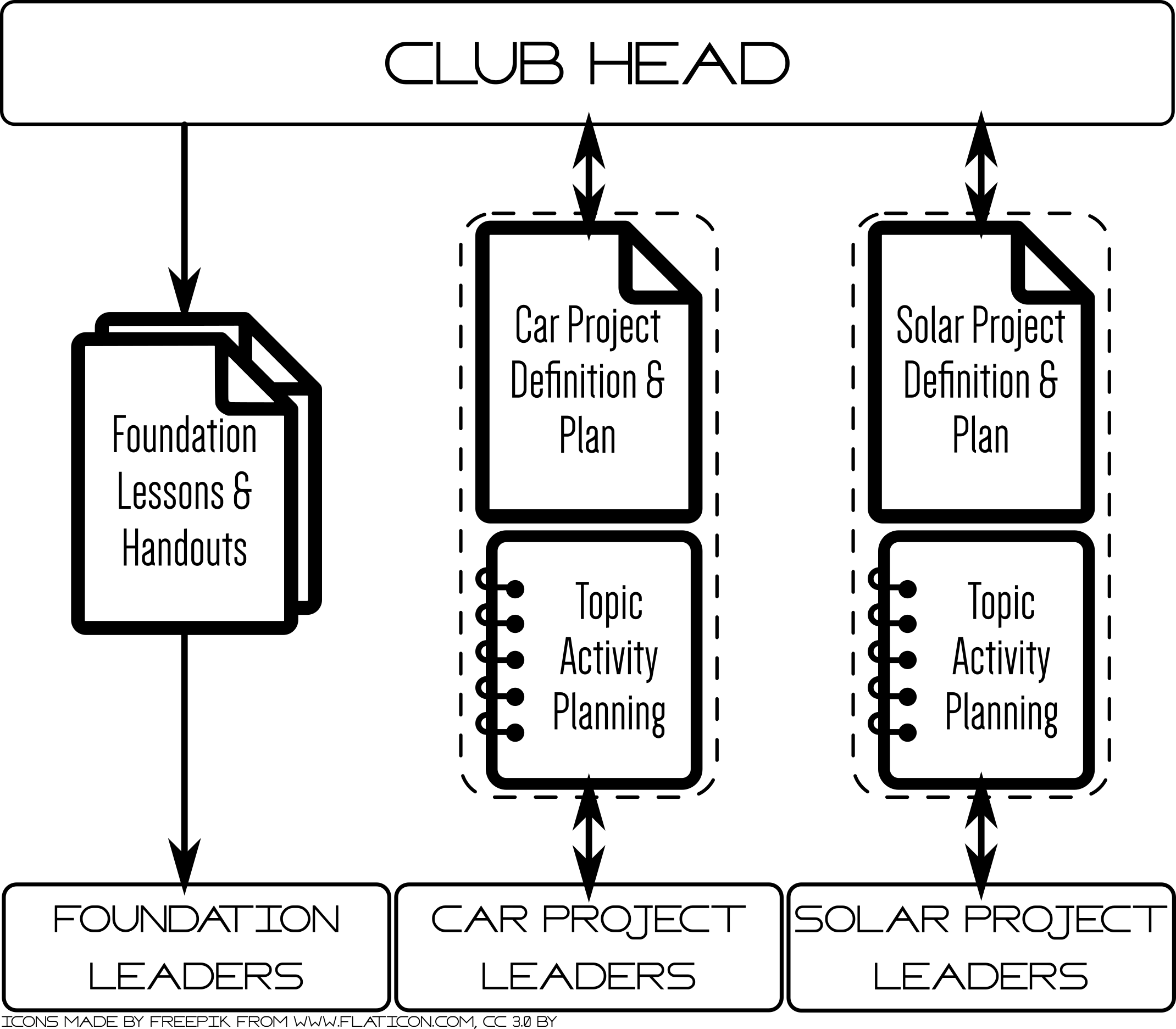 Each year, a total of four newly recruited members become Foundation Group Leaders (two per semester). Ideally they will then choose to take on leadership roles when they graduate into the Car Project group during their 2nd semester. These new leaders help offset the Group Leaders who leave the club after graduating from the school (grade 10), or who choose to resign from their leadership role.

Group Leaders are selected by the Club Head and existing Group Leaders. New Group Leaders who have just joined HMG for their first semester are chosen based on their interest in the role, understanding of its expectations, and any relevant previous experience. Members who become group leaders after their first semester in the club (Experienced Group Leaders) are chosen according to the commitment they’ve shown to HMG (attendance, in-class participation) and their understanding of electronics and programming as observed by the leaders and Club Head during activities.

An important part of the success of the Club Head position is that the student can work in the role full-time at SMD school, where HMG is based, due to the “Seniors Program.” In the Seniors Program graduated students give one year of service back to their school. After one year the Club Head will pass on the role to the next person, but continue to act as an advisor to the new Club Head. The new Club Head will work closely with the previous Club Head during their first month (May/June) to understand the role.

An overview of HMG leadership roles:

Being a leader in the club takes extra time and effort. Still, students are motivated to take on the responsibility because it gives them the opportunity to learn the concepts in more depth, spend more time hands-on with electronics and programming, and expand their skill-set as student leaders. Also, they understand that the success of the club is dependent on its student leaders and it is up to them whether or not the club will stay active. From the start, the structure of the club encourages them to take on these roles, positioning their own peers as mentors and role-models.

The most experienced members of the club - those who have completed 3 semesters, including the Foundation Activities and both projects - will have the opportunity to join a fourth group, the Open Project Group. The group will be a platform for these members to explore new challenges in a more self-directed manner, with the support of the Club Head, for multiple semesters until they finish grade 10. As they define and work through these projects, they will be prototyping projects that may be suitable for the entire club to participate in. With some additional documentation and support from the Club Head, their projects could become a recurring project alongside the Car and Solar projects.

To give an example of a typical member’s timeline in the club, if a student joined the club in the first semester of 2018 as they enter grade 5 they will have the option of joining the Open Project Group during their 2nd semester in 2019, as a grade 6 student. 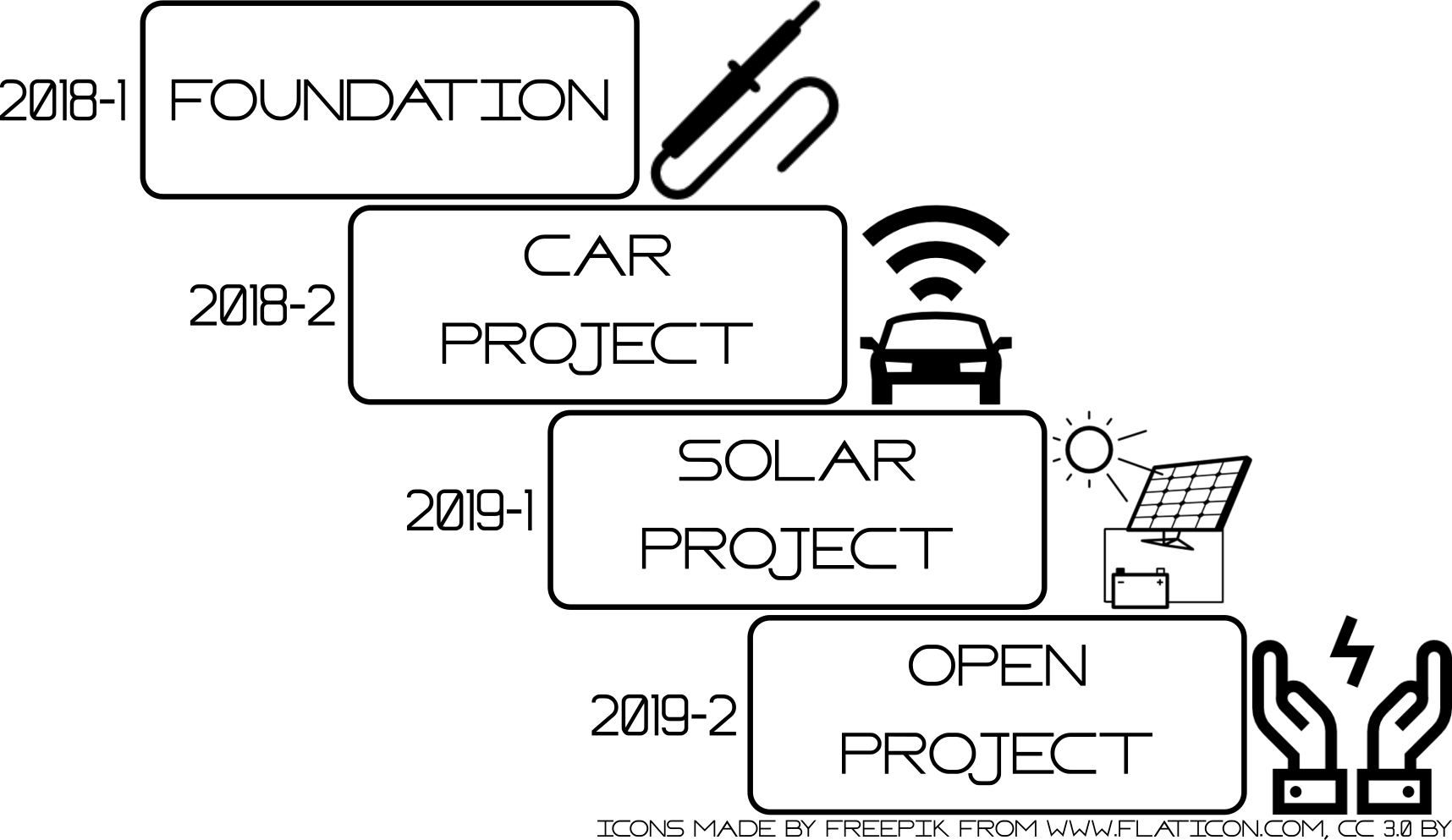 Students will work together in groups of 3-4 and select a project to work on for the semester based on their interests and challenges facing their community. There will be no specific leaders within the Open Project Group. As the most advanced group of students in the club, they will guide themselves and communicate directly with the Club Head. In turn, the Club Head will ensure they are on-track to complete a project within the 6 month semester, and that they have the resources they need to be successful. 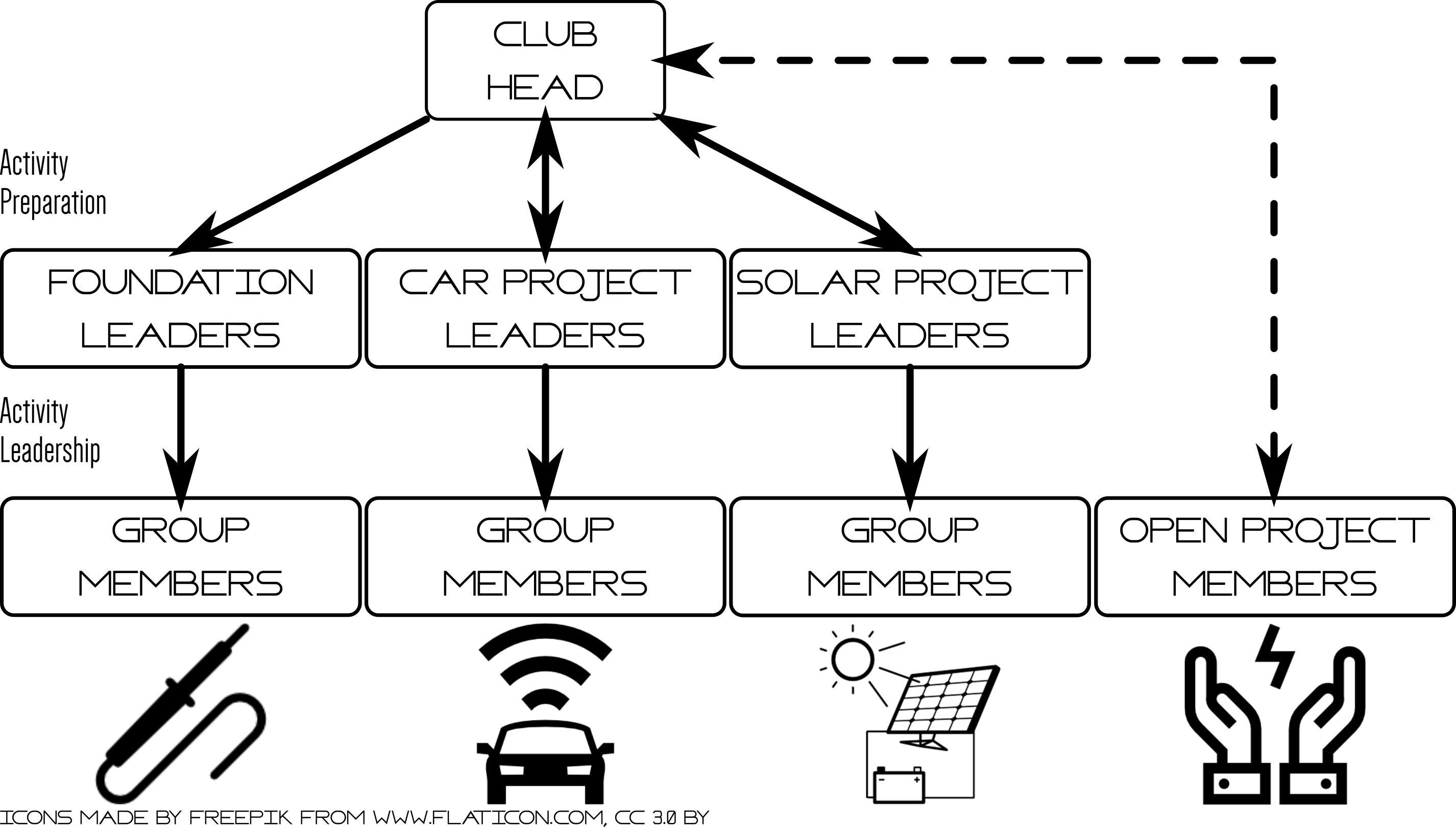 5. Where Things Left Off

When I left in June 2018, the club has been running independently for one month. Tashi had taken on the role of Club Head, guiding 50 club members including a team of 14 Group Leaders. 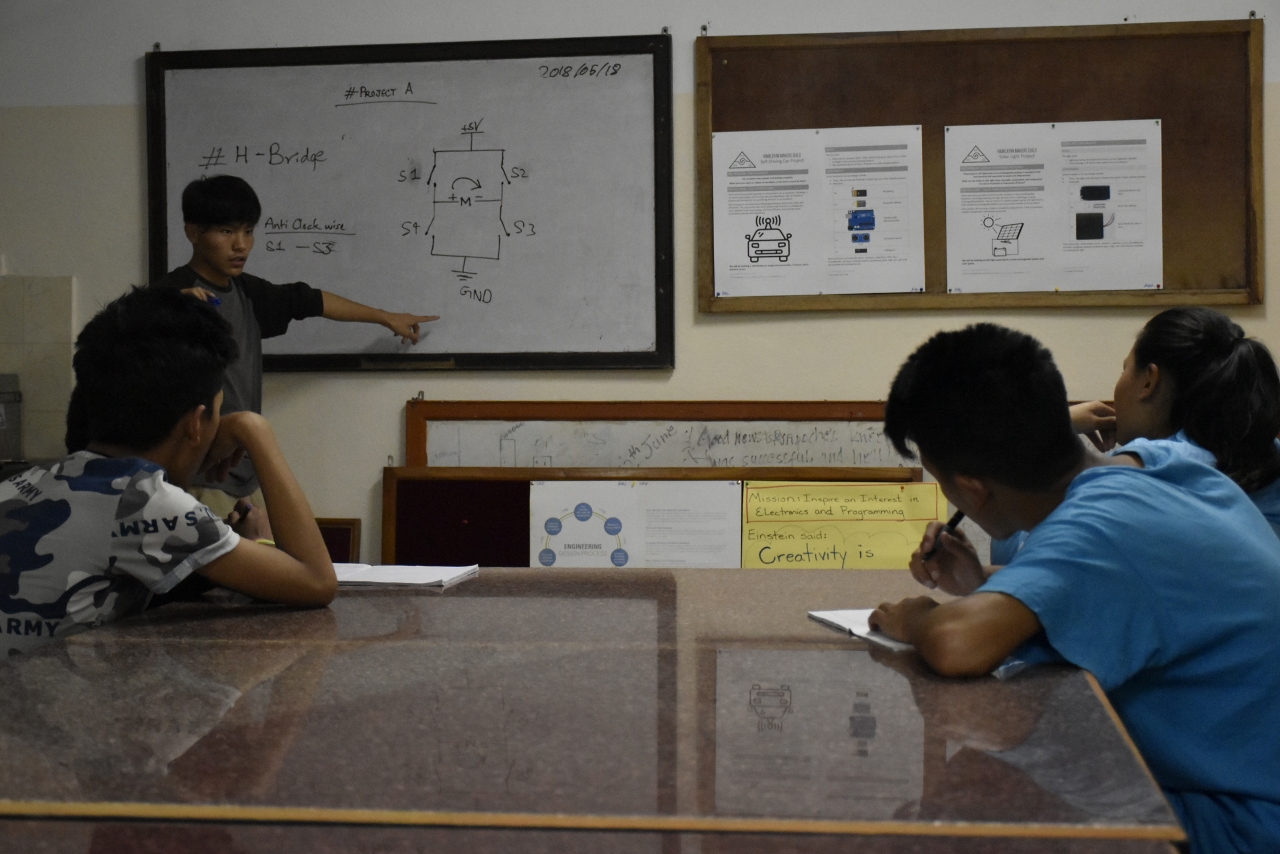 Just before leaving SMD school I gathered all of the club members to thank all the students for their participation and contribution, explain the new club structure, and highlight the role they will play in the future of HMG as members and leaders. 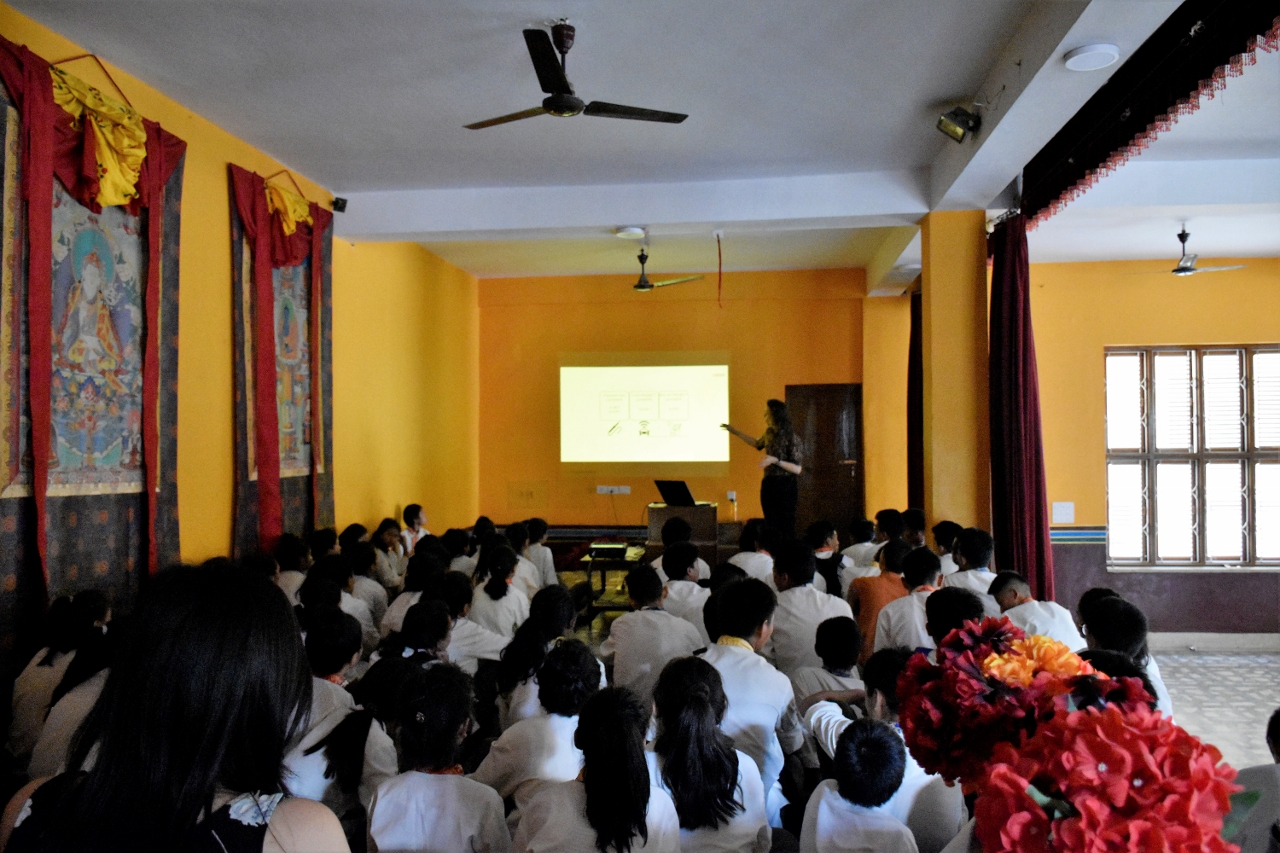 Giving an overview of the new club structure and leadership to all members the day before I left Nepal. 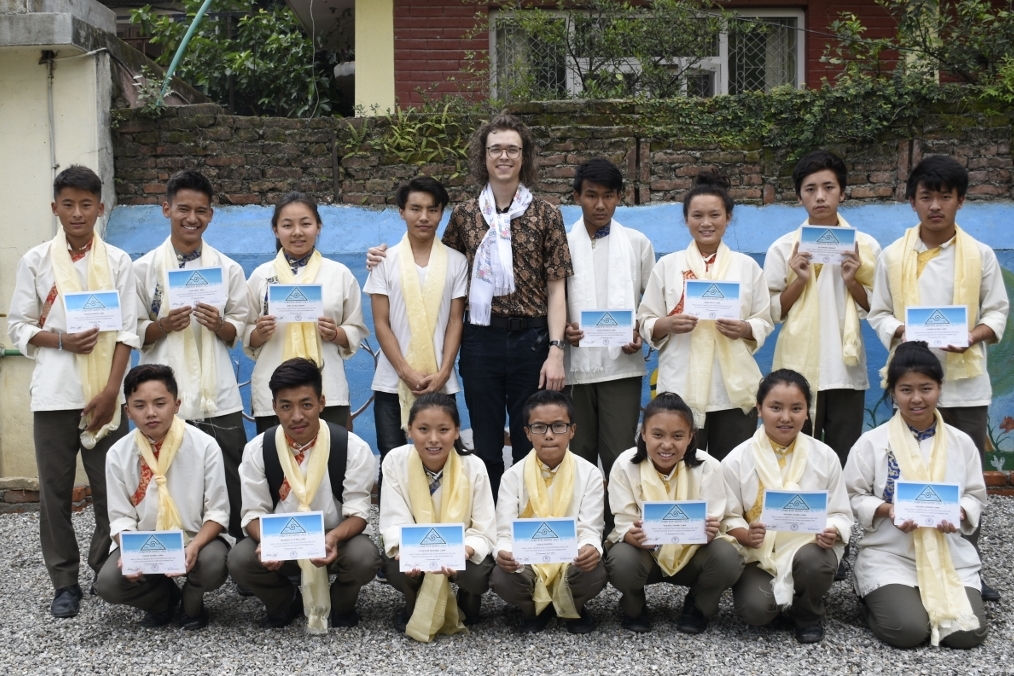 HMG student leaders with certificates of appreciation for their ongoing involvement in the club, with Tashi and I at the center.

It was an honor to work with these kids. I continue to be inspired by their enthusiasm, intelligence, and independence. By giving me the opportunity to teach and organize HMG, they helped build my confidence and taught me about engineering education and student leadership.

My hope for HMG is that it will continue to provide an opportunity for students to gain exposure to electronics and programming, and most importantly give them the confidence to teach, experiment, make, and enjoy taking on projects and problems that matter.

The club has the foundation and structure to maintain and develop its existing knowledge-base. I hope that the students will train their peers as new leaders, and together they will keep the club running for years to come. The students have the motivation, ability, and resources to make it happen.

6. Want To Start A Club? Here Are Our Resources.

You can find all of our teaching resources for free use and adaption on our github page. Here is a link to download everything as a .zip file. It includes lesson plans, handouts, our lesson plan template, and guidance documents for the Car and Solar project.

It would be lovely to see the materials and club structure used in other contexts. Please let me know if you find the resources helpful and have any feedback!