The Himalayan Makers Guild members try out soldering for the first time, and put our 10 new soldering stations to the test.

Last week the students returned from a two week holiday. During that time, we were able to assemble the tools for 10 full soldering stations. This past weekend, the Himalayan Makers Guild (HMG) members tried out soldering for the first time. Watching the younger kids solder was frankly adorable. Can you imagine yourself trying to solder in grade 4? I was really impressed by how quickly everyone caught-on, and that they all had the courage to give it a try in spite of the 300°C soldering iron that’s involved. We stressed before starting the activity that the students need only try it if they felt comfortable. The students did well with following the safety precautions.

A student in grade 4 demonstrates her new soldering skills. I'll mail an HMG sticker to the first person who can name the song playing in the background.

We started with a brief overview of soldering, the tools used, safety, and how it’s done, then moved into the school’s science lab1 for the hands-on part of the activity. Having introduced the Team Leaders to soldering two days before, the leaders demonstrated making a solder joint for their group then the students tried it out for themselves. Each student who successfully made a solder joint was given an HMG sticker, and I’m happy to say that after checking each student’s work all 50 of them left with a sticker! One student put his new skills to use immediately to fix one of the school’s audio cables. Shortly after that, another member brought in a broken microphone to fix. They did as well as, if not better than, a group of 1st and 2nd year engineering students that I did a similar tutorial with. 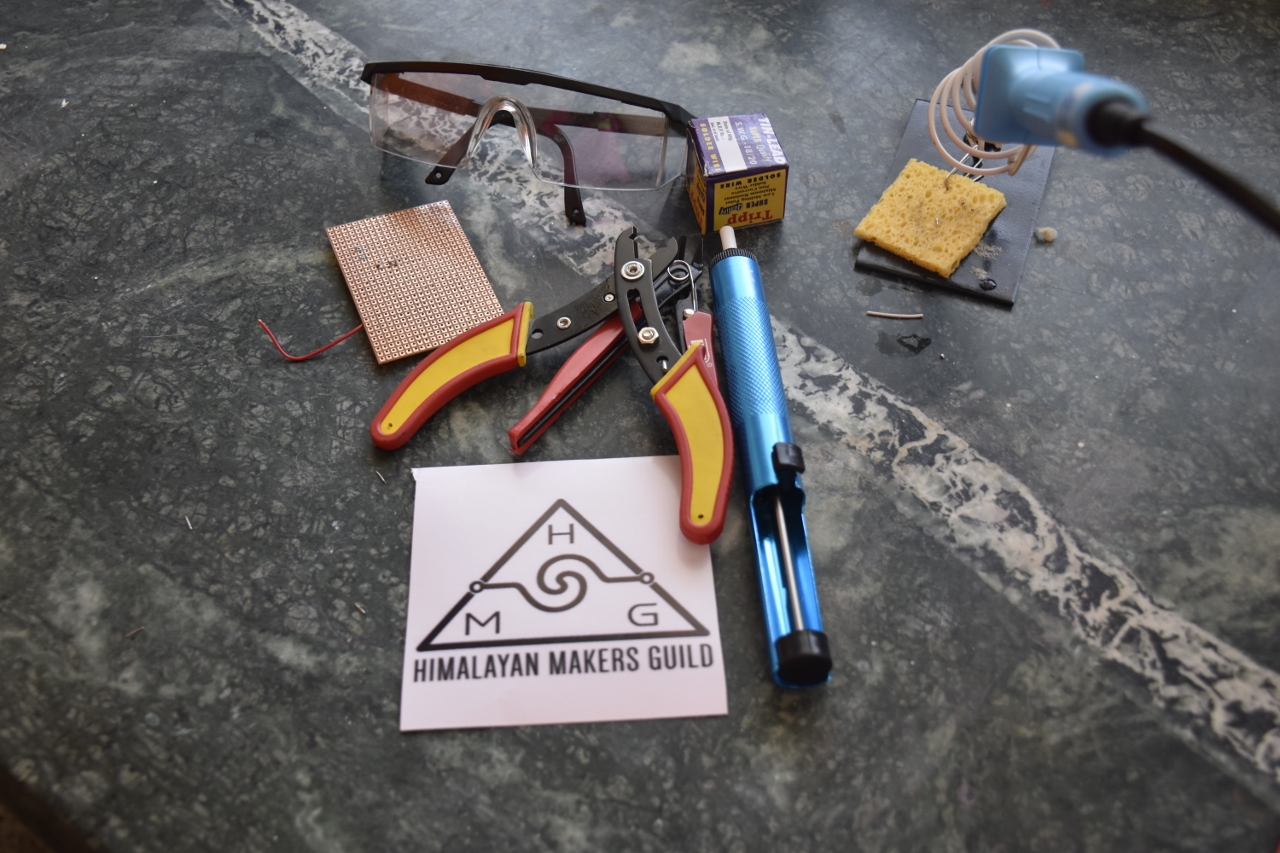 An HMG sticker along with all the soldering tools.

Six boys and two girls were absent, leaving 15 boys and 35 girls (30%:70%)2. The cost of 10 soldering stations complete with tools and supplies was $112 CAD3. We also used 10 prototype boards and about two meters of wire, costing a total of $2.82 CAD. Fifty students participated, bringing the cost-per-student to $2.29 CAD.

Activity 8 was created as a Free Cultural Work and is available for use and adaption under the CC BY-SA 4.0 license: